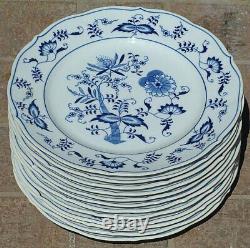 12 Blue Danube dinner plates in mint or brand condition. They have the rectangle logo backstamp.

Dinner plates are becoming scarce and sought after, so don't let them get away. There are no chips, cracks, or flaws, just the way you want them. FYI, Blue Danube Japan got its start in Post WWII Japan circa 1946 - 1947 as HAL-SEY FIFTH china during the U.

Rebuilding of the Japanese business economy. No doubt referring to the U. Fifth Fleet of warships in the Pacific which was predominantly a ploy on our part to trick and confuse the Imperial Navy into believing we now had a second fully operational task force in addition to the formidable Third Fleet. In reality, the Fifth Fleet was largely mothballed and damaged ships, many under tow. By 1948 the pattern and company had evolved into Halsey Fifth Blue Danube with the familiar and characteristic ribbon backstamp; and the stock numbers were impressed into most of the china.

Around 1949 the company changed its name again to the now familiar Blue Danube Japan. Sometime around 1950 Lipper & Mann traveled to Japan and secured an importers contract with the company which granted them exclusive distribution rights in the United States. At this time the stock numbers were no longer impressed into the china but instead printed on the boxes.

Lipper & Mann then subsequently filed for registration of the pattern with the U. Servicemen; including my Great Uncle stationed in Japan in the late 1940's; brought home large sets of Blue Danube for their wives, and it had already become quite popular in the U. Despite being difficult to get. Lipper & Mann's contract assured brisk sales in numerous department store chains throughout mainstream America.

The traditional blue and white Blue Danube we all know, and a very exclusive, high end deep maroon red and gold trimmed accented version which is rarely found today. What is unclear is what happened next between Lipper & Mann and Blue Danube Japan following the U. Design patent being granted, circa 1953. One can assume that Lipper & Mann tried to stop all sales of Blue Danube through BD's other pre-existing venues, and tensions between the 2 companies escalated for years.

What is known is that when the dust finally settled, the importers Lipper & Mann now introduced Vienna Woods / Blue Onion; which appeared to be very similar in design and intentionally developed to compete with the Blue Danube line. All items are custom packaged after the sale when I have a destination address. Please see the pics which do not do them justice. The item "12 Blue Danube Dinner Plates Mint or Brand New Condition Rectangle Logo L@@K" is in sale since Sunday, August 23, 2020.

This item is in the category "Pottery & Glass\Pottery & China\China & Dinnerware\Blue Danube". The seller is "hobbit7" and is located in Pauma Valley, California. This item can be shipped worldwide.