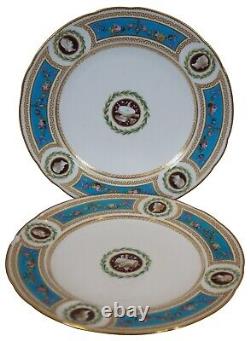 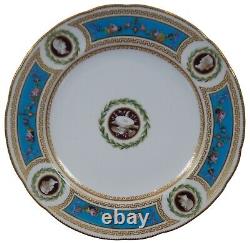 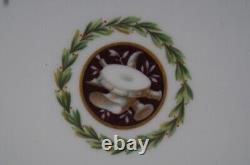 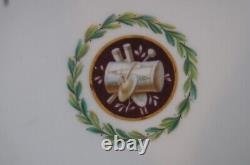 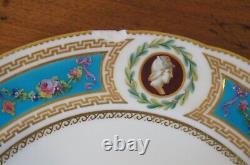 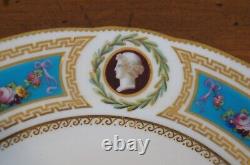 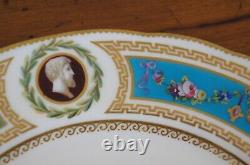 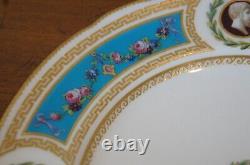 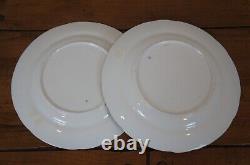 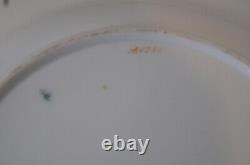 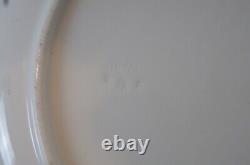 These superb quality Minton plates are from a dessert service shown at the International Exhibition of 1862 in London. The plates testify to the enduring influence of 18th Century Sèvres on the tastes of Victorian high society. The designs are far from being mere copies, however; while there are recognisable Sèvres elements, they are arranged in entirely new and delightful ways. On the rim are four imitation cameo heads of classical deities en grisaille on a red-brown ground, within oval reserves wreathed in laurel.

The profiles are individually painted; compare, for instance, the winged helmeted heads of Hermes/Mercury and you will spot subtle differences. The cameo devices, used here for the first time by Minton, derive from the celebrated Sèvres dinner and dessert service commissioned in 1777 by Catherine the Great for her lover, Prince Grigory Potemkin. Each dish, bowl, cup and plate of the spectacular tour de force that nearly bankrupted Sèvres featured painted imitation cameos of deities and mythological scenes.

In Russia, it is known as the Cameo Service. The Sèvres cameos too interrupt a band of turquoise-tinted sky blue, the famous Sèvres bleu celeste, but there the resemblance between the two services ends. The Minton panels are embellished not with heavily gilt and tooled acanthus scrolls, but with bright and joyous festoons of enamelled summer flowers and leaves, with a cabochon pendant in the centre and pink ribbons at either end, all framed in a Greek-key chain of raised gold. The wells of the plates have outer bands of tiny gilt scrolls. In the centre, in place of the crowned monogram of Empress Catherine II, one finds trophy-type circular medallions enclosed in laurel wreaths.

Painted en grisaille, on the same red-brown ground, are instruments of war and music. The martial example contains a shield, bow, quiver and two loose arrows.

The other roundels show wind instruments, as well as a tambourine, bagpipe, stringed lyre and sheets of music. The bases of our plates are impressed with MINTON and date codes for March or April of 1862, just before the 1st May opening of the international exhibition in London. There are two further marks of interest, the pattern number, A5325, and the'ermine' mark. The Stoke-on-Trent City Archives, who now own and administer the Minton Archive, have found an entry for the pattern number in the original Minton pattern books.

The entry is dated 22nd May 1860 and there is also an artist's image of the design, showing musical instruments in the centre. The painted ermine mark is an arrowhead and three dots, and is indicative of Minton's desire to emulate the pâte tendre of Sèvres before it switched to making hard paste. In his book Minton Pottery & Porcelain of the First Period, Geoffrey Godden said of the ermine mark,'It was used to denote a special soft glaze into which the fired enamel colours would partly sink during firing, resulting in the soft mellow appearance of painting found on the highly desired old Sèvres porcelain.

The sooner you pay, the sooner you get your item. Please let us know if you have any additional questions. We are sorry for the inconvenience.

We do are very best to package and secure all our items so they make safe trips to their new homes. We strive to get your items delivered in the most safe and cost effective manner. Add a map to your own listings. This item is in the category "Pottery & Glass\Decorative Cookware, Dinnerware & Serveware\Plates". The seller is "designersconsignment" and is located in this country: US.